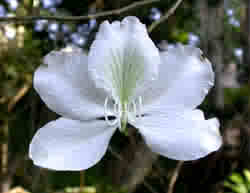 In Spanish slang, "Mariposa" means gay. Well, the best translation would probably be "fag." Gay isn't negative enough. Queer is too politcal. "Faggot" is too derogatory. "Sissy" too childish. Yup, I think the best english word equivalent is "fag." The actual translation of the word to english in "butterfly." Easy to see how the slang came about.

I had no idea, white mariposa (butterfly jasmine) is one of my favorite flowers and the national flower of Cuba. I've always loved the way mariposa sounds when said out loud--how could they take something so beautiful and ruin it?!

Sadly, th Spanish didn't "ruin" that word. The English did. The word for a male prostitute who made himself more feminine to attract straight trade is "butterfly." No surprise that M. Butterfly features a man who convinces another man he is a woman so that he can steal secrets for his own government. The spanish slang only co-opted butterly as a term for gay men. Personally, I find the word beautiful, with and without its connotation for gay men. In many ways, I find it flattering, that gay men are beautiful. Ha!

Gay men *are* beautiful, it's a bit maddening for the straight girls. ;-)