A Trip to the Very Small Zoo 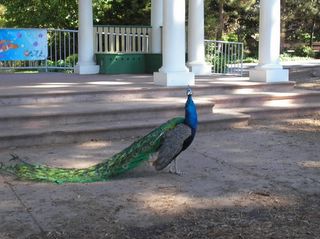 The peacocks were allowed to roam around freely--they seemed like the only happy creatures in this sad little zoo.

OK, to be fair, the sea otters were very happy, but the Siberian Tiger? Uh-uh, he was not loving life.
Share |
Posted by Suzanne at 5:32 AM

My husband is from Connecticut and the last time we were there we went to the Beardsley zoo (I think that is the name) and the peacocks were also free. They were amazing. They did not seem real. I find it amusing that the females are so plain (and they are penned up...)

Hi Jenn,
That's were we went, the Beardsley Zoo. I had never been there before--the only zoo I have ever been to is the Bronx Zoo and it's much more ummm, open. I found this little zoo depressing other than its gorgeous peacocks and the playful otters. I did get a poem out of the whole experience, must be thankful for small things, eh?

you should try the PT Barnum museum. I just know we could wrestle a ton of poems out of there!!

Peacocks seem to make themselves happy wherever they happen to be; I think it's the excess of attitude. There's at least one roaming free around the grounds of the Ste Michelle winery, and it's always shocking to come across him in the middle of all that sedate Northwest greenery.

Suzanne, your photo reminds me of this poem by Wallace Stevens: Domination of Black.

There should be a law against putting poetry, especially good poetry by the likes of Wallace Stevens, on web pages with annoying animated graphics, pop-up windows, and other antithetical advertisements.

Suzanne
My most recent poetry collection Fixed Star is now out with JackLeg Press (September 2022). 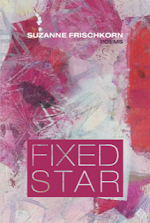