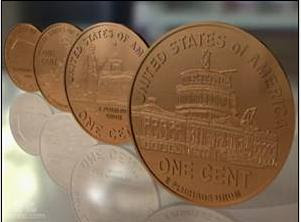 Four pennies with different reverse designs will be released in 2009 to celebrate the bicentennial of Abraham Lincoln’s birth and the 100th anniversary of the Lincoln cent.
While the obverse or heads side of the penny will remain unchanged, the 2009 pennies will bear new reverse images for the first time in 50 years. In 1959, the currently used Memorial reverse replaced the well known Wheat Ears design.
Abraham Lincoln was born on February 12, 1809. On the same day in 2009, the first new Lincoln cent will be issued. The remaining three pennies will be released at intervals throughout 2009, and the existing design returned in 2010.  --CoinNews.net

Email ThisBlogThis!Share to TwitterShare to FacebookShare to Pinterest
Labels: something2009